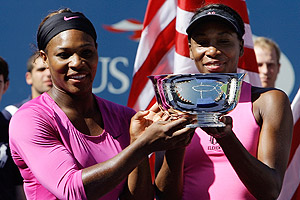 My favorite tennis playing siblings are playing in the last Grand Slam tournament of the 2011 tennis season at the  US Open in New York.   They are only playing women's singles in this one probably to the relief of the women's doubles competitors.

They are thankfully on opposite sides of the draw once again, with Serena on the side of the draw that contains current world number one player and number one seeded Caroline Wozniacki.

Serena hasn't played her opening round match yet, bit the unseeded Venus has gotten her US Open play off to a successful start yesterday by winning in straight sets 6-4, 6-3 against Russia's Vesna Dolonts.  26th seeded Little Sis has an opening round match with Serbia's Bojana Jovanoswski.

The US Open continues through September 11, and it would be nice to see them be the last women standing on that day.
Posted by Monica Roberts at 12:00 PM