Tired of The 'Africans Sold Your Ancestors Into Slavery' Meme 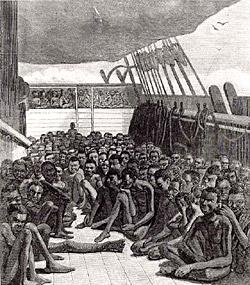 One of the memes I'm really sick of hearing is the one making the rounds from conservative whites trying to deflect their well documented involvement in the massive human rights crime known as the Atlantic Slave Trade is this meme that 'Africans sold your ancestors into slavery'.
By using that meme, they are trying to absolve themselves of the moral taint of the Atlantic Slave Trade or Maafa, shift some of that burden onto continental Africans as well, try to paint them as equally culpable and obfuscate the fact that they owe the descendant of African slaves reparations for 246 years of unpaid labor..

Um no.  Dr. Kwabena Akurang-Perry, author of the book Ending the Slavery Blame, you have the electronic floor..

"The viewpoint that “Africans” enslaved “Africans” is not only problematic, if not troubling. The deployment of “African” in African history tends to coalesce into obscurantist constructions of identities that allow scholars, for instance, to subtly call into question the humanity of “all” Africans. Whenever Asante rulers sold non-Asantes into slavery, they did not construct it in terms of Africans selling fellow Africans.

They saw the victims for what they were, for instance, as Akuapems, without categorizing them as fellow Africans. Equally, when Christian Scandinavians and Russians sold war captives to the Islamic people of the Abbasid Empire, they didn’t think that they were placing fellow Europeans into slavery. This lazy categorizing homogenizes Africans and has become a part of the methodology of African history; not surprisingly, the Western media’s cottage industry on Africa has tapped into it to frame Africans in inchoate generalities allowing the media to describe local crisis in one African state as “African” problem


Dr. Akurang-Parry is right.. It is lazy categorizing and flies in the face of the facts.    Africans did not set up banks in England such as Barclay's and the Bank of Scotland that made their money off the Atlantic Slave Trade.  Lloyd's of London made profits off insuring slave voyages.  The American shipbuilding industry centered in New England got its start by building slave ships    And it damned sure wasn't Africans operating and sailing those ships across the Atlantic during the brutal Middle Passage.

The doctrine of racism arose to justify the slave trade and it still has deleterious effects on my people. .  As Professor Maulana Karenga stated about it in the Ethics of Reparations :

The morally monstrous destruction of human possibility involved redefining African humanity to the world, poisoning past, present and future relations with others who only know us through this stereotyping and thus damaging the truly human relations among peoples.


So yeah, as you conservafools like to say, it's time for y'all to take personal ownership and responsibility for what your ancestors did that you still reap the benefits from in present day society.did.