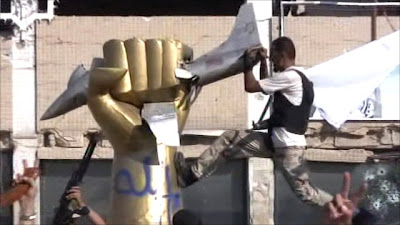 Seems it's even clearer that a decisive tipping point has been reached in the fight to topple the Muammar Gaddafi regime in Libya after rebel forces made a lighting dash into Tripoli and seized control of most of the city with the exception of the Bab al-Aziziya military compound that was still under his control.

It was the symbolic nerve center of the regime and was surrounded, assaulted, and finally overrun by rebel troops.  Watching the reports on CNN and MSNBC and seeing the jubilant troopers firing their weapons in the air as more troopers and civilians stream into it to get a look around it and hunt for souvenirs of this historic day.

In the meantime the eastern oil hub town of Ras Lanuf has fallen on the road to Gaddahi's hometown of Sirte.   Still no signs of Gaddafi or any of his family members, but the chase to capture them is on.