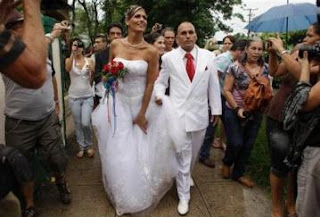 There's at least one country on Planet Earth in which people aren't actively fighting a transperson's ability to get married, and ironically that's Cuba.

On August 13, which just happened to coincide with Fidel Castro's 85th birthday, transwoman Wendy Iriepa got married to activist Ignacio Estrada in a Havana civil ceremony.

She arrived at the ceremony held at a Havana wedding chapel in a vintage Ford convertible car and holding a rainbow flag.

The 37 year old Iriepa was one of the first transwomen in Cuba to receive a state sponsored SRS when they were resumed in 2007 and made part of Cuba's universal health care system a year later.  Iriepa worked for Cenesex, the sex education center run by Fidel's niece Mariela Castro until they parted ways over Castro's questioning her relationship with the 31 year old Estrada. 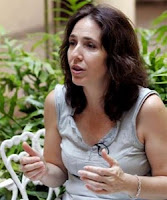 There have been developing tensions in the TBLG rights movement in Cuba centered on their powerful friend who is the daughter of Cuban President Raul Castro. Elements of it have accused the noted sexologist of monopolizing the cause and organized a smaller pride march in which Estrada took part in.

Despite the drama between them, Castro did take the time at a trans event on Friday to tout the work of Cenesex and wish Wendy well.

"One of our accomplishments has made it possible for Wendy to get married," Castro said. "It seems she found the love of her life and we wish her many congratulations, because all of our work has been for this, the well-being and happiness of our sisters."

Iriepa's maid of honor was dissident Cuban blogger Yoani Sanchez, who has received international attention and acclaim for writing about Cuban life and raised the ire of the government for doing so.

Sanchez said about the event via Twitter: "How positive! Cuba now shows itself to be a kaleidoscope of ideas... The only thing missing is for them not to be repressed." . Congratulations Wendy and Ignacio. May you two have a long, healthy and happy marriage.

My hope is the rest of your transsisters around the world get the chance to experience that walk down the aisle and getting married to the person they love without interference from their governments and misguided faith-based bigots one day as well.
.