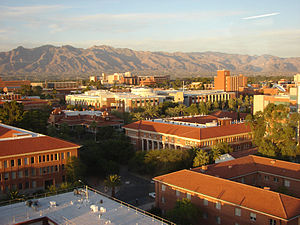 TransGriot Note: Thanks to Miranda Butler of the Daily Wildcat for this article on my impending visit to the UA campus tomorrow night

West African historians called “griots” can recite hundreds of years of their history from memory. Monica Roberts, an African-American transwoman writer and activist, has modernized this responsibility by adopting the role of “TransGriot” — telling the history of transpeople of color in her award-winning blog. Roberts will present her experiences with “Blogging at the Intersection of Race and Gender,” on Tuesday at 7 p.m. in Gallagher Theater.

Roberts co-founded the National Transgender Advocacy Coalition and has also led the Transsistahs-Transbrothas conference for black transpeople. But her “TransGriot” blog is one of her most influential projects. Since Roberts started the blog in 2006, the page has hit more than 3 million views.

Stephan Przybylowicz, co-director of the ASUA Pride Alliance, said Roberts is a significant figure in the trans community because she has reached a level of publicity that is not seen very often. Roberts says what she thinks and isn’t afraid of having her opinions heard, Przybylowicz added.

In her blog at transgriot.blogspot.com, Roberts explains that since 1998, the goal of her activism has been to “push for trans human rights coverage in Houston, Texas, and the nation, ensure that POC (people of color) transpeople’s voices are included in the policy mix, tell our stories, unearth our history, and be the stereotype-busting role model for African-American transwomen that I didn’t have growing up.”

The event, hosted by ASUA Pride Alliance, the Women’s Resource Center and African American Student Affairs, fits well with this goal. The “TransGriot” discussion will celebrate both Black History Month and “women’s herstory” by combining personal identities that are often separated.

“A lot of times when there are events for different heritage months, they don’t really think about people of color who are also LGBT … So, we wanted to bring together that intersection by having (Roberts) come to speak about both issues,” Przybylowicz said.

During the event, students and the general public will have an opportunity to hear Roberts’ thoughts on race and gender in everyday culture, the media, politics and legislation. There will be a question and answer session with Roberts afterward.

“When the opportunity presents itself, I get invitations to discuss trans issues from an Afrocentric perspective,” Roberts writes. “I enjoy speaking to college students and various audiences about our issues.”
Przybylowicz noted that the event is sure to be an inspirational way to get perspective on what’s happening in the world.

“It’s really an event that everybody can benefit from,” Przybylowicz said, “because even if none of those are your identities at all, you’re learning about somebody else’s experience. That has value as well.”