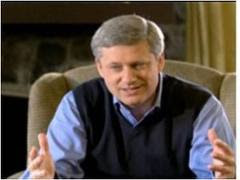 Renee of Womanist Musings and I have for years in our conversations pondered whether the Republifools on our side of the border and Canada's Conservative Party have been trading strategies and tactics.

She's told me about the voter suppression tactics that are being used in predominately First Nations areas of Canada that overwhelmingly vote NDP and some other election shenanigans in recent north of the border elections that eerily smell like they came from the GOP playbook. 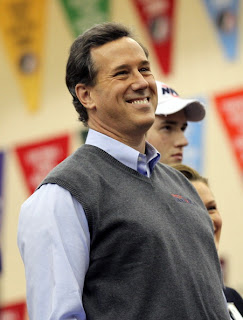 I also remember her talking about PM Stephen Harper, who she and other people on the Canadian left derisively call 'The Sweater Vest' for his penchant for wearing them during campaigns in order to make him and his conservative political stances seems more friendly.

Well, well, well.  Peep what Rick Santorum has started to wear more often on the campaign trail as he pimps his jacked up positions in this 2012 GOP nomination fight.

We peeps in the reality based America already know how far right wing and delusionary your positions are.  That wingnuttery might get you the GOP nomination, but 1600 Pennsylvania Ave. is another story.

Have you seen this?