Blake Lively and Transphobia at Elle 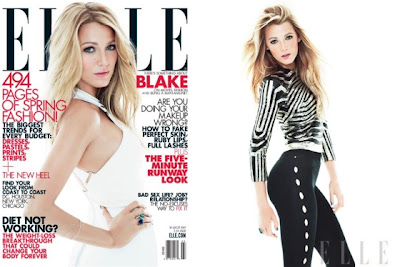 TransGriot Note: I had my say about Blake Lively's latest use of the t-slur, now it's Renee of Womanist Musings turn

I am starting to believe that Elle simply courts controversy in the hopes of selling magazines.  It engages in actions that are so clearly problematic, that I don't believe for one moment that they are not aware of what they are doing.

This month, Blake Lively appears on the cover of the magazine. Included with her cover, is of course a the obligatory cover article.  I would like to focus on a snippet of what Lively had to say regarding motherhood.


"I hope to have a few girls one day. If not girls, they better be trannies. Because I have some amazing shoes and bags and stories that need to be appreciated." (source)

Where to even begin with this hot mess? I suppose the obvious place to start would be her callous use of a trans slur.  Blake joins Neil Patrick Harris and Lance Bass as celebrities who have recently very publicly used this slur. There is never a reason or situation in which it is acceptable to use a slur.  The T word is not obscure, and trans* communities have been very vocal in making sure that cisgender people are aware that this term constitutes a slur and causes harm. To use this word is to purposefully attack and degrade trans* people.  In the case of Bass, he made a point of saying that his trans friends who use this term, and that he therefore felt that he had the right to.  This very much reminds me of when White people decide that it's okay for them to say nigger or nigga, because some Black people do.  The basic rule of thumb should be that if a slur does not apply to you, and it cannot specifically debase your humanity, then you have no right using it, or commenting on how the effected community chooses to negotiate it. If that were not enough, Bass went on to say that he did not get the memo, which reflects his cis privilege.  It is not an excuse to say that one did not know that the T word constitutes a slur, when trans*people have been saying so loudly for a very longtime. If he didn't know it's because he actively chosen not to listen.

I am the mother of two sons, and have made no secret of the fact that when I got pregnant that I wanted girls.  I have since dedicated myself to raising womanist sons and could not love and respect my boys more. I do not understand Lively's claim to want to have trans children, if they are not born cisgender girls for the purposes of having an accessory. This is not positive, nor does it deal with the issues of rejection that defenseless trans children face everyday.  You don't wish for a trans* child so that you can have a pet, or a captive audience.  To carry this idea one step further, I also feel the need to point out that this yet another example of Adult privilege. Lively's comments show a complete disrespect for children and their ability to teach us, even as we help to guide them on their journey to adulthood. It is also worth noting that if the only reason you want a girl is to teach or how to dress up pretty, then a lot of work needs to be done understanding the nature of patriarchy.


I truly hope that when this woman does eventually have a child, that the child is cisgender, because her comments prove that she is the last person who should be interacting with a trans* child, let alone be responsible for raising and guiding one.  There are precious few images of trans* people in the media to counteract the negative messages that she would impart. If anything, I believe that she would simply base her ideas on a reductive stereotype of what it is to be trans* and then expect the child to play out that role on a whim to suit her fancy.

Even with a cisgender child, Lively's attitude shows that she will pass on cissexist ideas, because she clearly has not even begun to process of decolonizing her mind.  As a cis mother, I can tell you that even when one has begun the journey to decolonize one's mind, it is a constant battle to challenge cis privilege, and to have your children see you do it.  There is a constant battle to mother in a manner that supports the equality of all, because all of the agents of socialization are determined to send your children the exact opposite message.  The fact that Lively's problematic assertion appeared in Elle is just one example of the medias investment in the diminishing historically marginalized people.

When I came across this story, one of the things I feared is that it would lead to yet another round of discussion, as to whether or not the T word constituted a slur.   Unfortunately, as expected, there are a few suggesting that trans* people need to simmer down, as well as the suggestion that no harm was done.  To be clear, each and every time you use a slur, harm is done. Trans* people don't have to be nice reacting to slur, and in fact, any anger they express should be validated and expected.  If you are not in the group being targeted, you don't get to debate how someone should respond, or whether or not the word is a slur.  The determination of harm needs to be made by the community the word is directed at.

I sometimes wonder how long we are going to continue to have these 101 conversations?  I also wonder how many marginalized people think that it's fine to diminish transphobia or their cis privilege? As a Black disabled woman, all I have to do is think about how angry I would be if a slur was aimed at me to identify with the rage felt by the trans* community when something like this happens.  Instead of spending so much time trying to embrace our various privileges, in the hope of moving to the top of the social pyramid, I think we would all be better off trying to align ourselves with historically marginalized people outside of the groups that we belong to.  The real strength is in numbers, not in the ability to oppress others at will.  I know it's cliche, but walking a mile in someone else's shoes, is sometimes the best way to understand how we are oppressed and how we at the same time oppress.