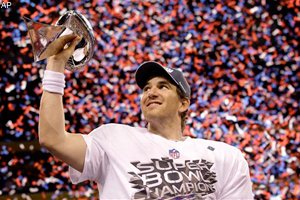 This is one Super Bowl I should have gone to a party to watch with friends because I did something I have never done while watching it.  I fell asleep on the game.

Probably because Super Bowl XLVI between the Giants and the Patriots was a rematch of a previous Super Bowl and I was still bummed about the Texans not being there that led to my somnambulent reaction to it.

It's also what happens when you wrap yourself up in a blanket on a cloudy, cool and dreary Houston weather day, stretch out on a couch with your head propped up against a comfy pillow and you eat before the start of it. 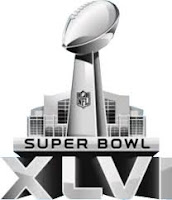 I dozed off for most of the second quarter, woke up with a little over two minutes to go in the half.  Was up for Madonna's halftime show I should have stayed asleep on, and dozed through much of the third quarter.

But I was wide awake for the entire fourth quarter and that Giants championship drive..

And yes, got my prediction right.

The NFL season is over and it's only five months until the NFL training camps start up in July.   And before y'all ask, Mike Watts and I will be going head to head with our prognostication contest again in 2012 since we finished in a regular season dead heat.

And I plan on beating him next season.
Posted by Monica Roberts at 2:00 PM