Do Marginalized People Need to Turn the Other Cheek? 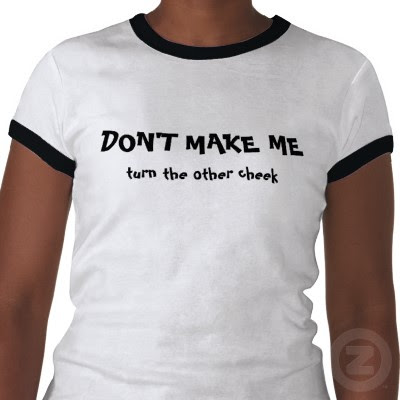 Guest post from Renee of Womanist Musings who is all that and four bags of ketchup flavored potato chips.

Last year, I wrote a piece about Destruction's thoughts on Disney's Peter Pan. He was incredibly disturbed by the movie, because of the racism in it.  Yesterday, it received a new comment and since the piece is now buried in the archives, I have decided to elevate the comment for the purposes of discussion.


Your kid has the capacity for common sense that has eluded the world for centuries. However, is it not just as bad to return racism like that with hate as it is to be racist in the first place? He recognizes the need to stop the racism, but it's your job now to teach him how to deal with it. Taking a militant standpoint only makes things worse. Nonviolence. Kill ignorance with kindness.

Hir comments were restricted to race, because the post itself was about race; however, I think that this conversation can and should be made broader.  The suggestion that Destruction not become militant is an exhortation that is constantly aimed at historically marginalized people. Think about how the GLBT community has routinely been charged with pushing a militant gay agenda by homophobes. The gay agenda has been constructed as actually threatening to heterosexual people. Consider for a moment how the fight for gay marriage has been responded to with the suggestion that it will somehow harm heterosexual marriage. The women's movement continues to be subject to the exact same sort of discourse, even as they tell us they we are over reacting to things like rape culture.  Rush Limbaugh has made quite a living for himself attacking women's activists and suggesting that they are militant. When Disabled people protested the ableist, Jerry Lewis, they were called a militant angry fringe.  Whenever historically marginalized people respond with anger, they are accused of working an agenda or of being overly militant.

With any marginalization there comes a point when one comes to awareness of where exactly one stands.  For POC, we begin in an environment of love with our parents and over time, as we venture into the world, we become aware of what it is to be a person of colour in a White supremacist world.  For gays and lesbians, they begin to notice that something is different about them, and once they realize what their sexuality is, the awareness of what it means to be gay or lesbian in a homophobic culture quickly takes hold, as they deal with the issue of coming out or not, or negotiating the various oppressions aimed at them.  For trans people, there is the dawning awareness of realizing one's internal gender, does not match the outward gender, and what it means to be trans in a world in which cis bodies are privileged.  With this comes of course the consideration of coming out as trans, whether or not to transition, and of course all of the oppression that comes with being trans. With disabled people, there is the realization that the disability itself exists, and then negotiating a world that is not built with us in mind. No matter the ism, there is a point of coming to awareness with it, and a decision of what to do next.  The next step will be different each group, but what they all have in common is that any fight for inclusion, equal rights, or freedom from oppression will inevitably be viewed as militant, and quickly dismissed by the ruling classes.


Destruction is almost 11 years old, and in his short time on earth, he has been subjected to a ton of racism, though he is bi-racial. He understands that within his home that he is loved and valued, but the innocence has long since been cast from childhood, due to the racist attacks he has had to negotiate. Whatever feelings he develops about Whiteness, are a direct consequence of living in a White supremacist world. The idea that I should again thwart his agency by telling him how he is too feel, or react is problematic, and denies him one of the few areas of agency in regard to the oppression that he faces.

Much has been made of kumbaya approach to reacting to oppression. Turn the other cheek has become the expected response, even as marginalized people are on the receiving end of violence on a daily basis through either a physical action or hate speech. The arrogance it takes to believe that gays and lebsians should not hate a group like The Westboro Baptist Church, or Focus on the Family, or that POC should not hate groups like Stormfront, or the KKK is ridiculous.  Hating the people who wish us death and actively work to oppress us is not only human, but natural.  The very idea that hating our oppressors is the same thing as the oppression itself, speaks to a complete denial of the humanity of marginalized people, and an attempt to once again control us.

Hate, while it isn't pleasant, isn't always as counter productive as it is made to seem.  Sometimes, hate can be the inspiration to demand change, and sometimes it helps to embolden self worth - thus a negative emotion can become a creative force. Hate should not always be the preserve of the most privileged people.  Hate, like it or not is part of the human experience;  it is an emotion like any other.  Telling marginalized people not to hate, is to deny them a common experience.  It is particularly problematic when the hate is aimed at someone intent on causing them harm.  If ze had said not to become consumed by hate then, and only then -- would ze have had a point.


Militant does not have to mean violence.  I have often described myself is militantly Black with pride.  For me, it means embracing my Blackness and loving myself in spite of all of the negative connotations inscribed to my Black, female, disabled body.  Militant can and should be an expression of self. The only reason militant has historically been seen as problematic, is because privileged people far prefer marginalized people to be passive and silent.

I am not going to tell anyone how to negotiate their oppression, because to do so would embolden my various privileges, while removing their agency. Though Destruction and I share the same racial oppression, telling him how to feel, would send the message that he should sensor himself, or that he is not entitled to his feelings, which is exactly what Whiteness has invested so heavily in teaching him.  It is one thing to abjure violence, and another thing entirely to suggest that marginalized people have to avoid feelings of anger and hatred to those who do them harm.  In the end, whatever emotions he develops towards Whiteness, will be because of his lived experience, and it is not for me or anyone else to tell him how to feel.
Posted by Monica Roberts at 8:00 AM

I recently watched Black Power Mix Tape and I thought it did a great job of hammering home that "militant" can mean "I will defend myself against violence" which then looks like violence to the oppressors who are expecting marginalized people to roll over and take it.

"You ask me, you know, whether I approve of violence [...] I grew up in Birmingham, Alabama. Some very, very good friends of mine were killed by bombs, bombs that were planted by racists. [...] when the bombing occurred, [...] after that, in my neighborhood, all the men organized themselves into an armed patrol. They had to take their guns and patrol our community every night, because they did not want that to happen again. I mean, that’s why when someone asks me about violence, I just — I just find it incredible, because what it means is that the person who’s asking that question has absolutely no idea what black people have gone through, what black people have experienced in this country, since the time the first black person was kidnapped from the shores of Africa." - Angela Davis