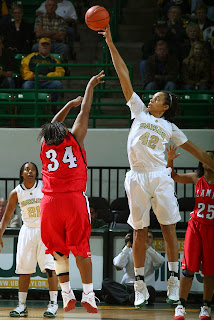 Y'all know I have much love for my Houston b-balling homegirl Brittney Griner who is now a junior center with the number one women's ranked Baylor Lady Bears.

Was happy to hear that when the 21 finalists were announced by USA Basketball for the 2012 USA Women's Olympic basketball squad that will attempt to fivepeat in London, she will be one of them.

The finalists for the 2012 Women's Olympic squad in addition to Brittney Griner (Baylor University) are: 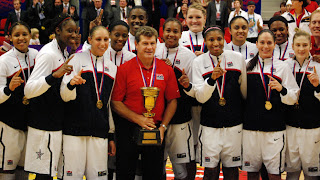 Bad news for the rest of you basketball playing nations on the rest of the planet.  Ten of the women on this finalist list were on the number one ranked 2010 FIBA Women's World championship squad.

And yes, do have to point out the USA women have won six out of the last eight Olympic women's gold medals with the last four coming at Australia's expense.

But back to bragging about my hometown hoopster.

Brittney will attempt to become the first collegiate player to make a USA Olympic women's basketball team since Vicky Bullett and Bridgette Gordon both did so and played on the 1988 squad that won a repeat gold medal in Seoul.

Good luck to Brittney and the rest of the women who have a shot of making our 2012 Olympic team.