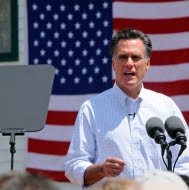 Gee thanks Willard for letting me and the rest of America know that.

But it's something that anyone with intelligence that doesn't watch Fox Noise could have figured out by Romney's Greed Is Good capitalism stint as the CEO of Bain Capital.

Soledad O'Brien gave him a chance to clean up his remarks by saying, "There are lots of very poor Americans who are struggling who would say, 'That sounds odd.'"

But Willard kept right on going by saying, "We will hear from the Democrat party, the plight of the poor.... You can focus on the very poor, that's not my focus.... The middle income Americans, they're the folks that are really struggling right now and they need someone that can help get this economy going for them."
Wow, talk about a major gaffe less than 24 hours after you captured the winner take all Florida primary and opened up a little delegate separation between you and Newt.   Romney just gave President Obama, his GOP primary opponents, DNC chair Debbie Wasserman Schultz, the chairs of the DCCC and DSCC and other progressive constituencies two money quotes to bash him over the head with from now until November 6 should he become the Republifool nominee.

Gordon Gekko, Jr also just effectively admitted in the same CNN interview that the Democratic Party is the one concerned with the very poor and low income people.

I hope you very poor and low income people were paying attention and consider that on Election Day.
.