This time it comes from Tea Klux Klan Senator Mike Lee of Utah, who responded with this comment Thursday when asked a question by ThinkProgress about whether he supported ENDA

KEYES: ENDA is something that rumbles every now and then in Congress. What’s your take, do you think it should be legal to fire someone just because they’re gay or transgender, or do you think that’s not in the purview of the Constitution?
LEE: Look, I think employers ought not make their hiring decisions based on categories like that, and I don’t think most of them do.
KEYES: But whether or not it should be a crime.
LEE: Whether it should be a federal crime, specific to federal law? No. I think the federal government has expanded its role into regulation of matters that historically that were in the purview of the states. [...]
KEYES: Is there any difference between firing someone for being gay rather than firing someone because of their race?
LEE: Yes, yes. The 14th Amendment — in fact the 13th, 14th, and 15th Amendments — were adopted specifically around the race issue. So, yeah, there is a difference.


I find it hilarious that the GOProud conservafool sellouts were barred from the CPAC conference, but white supremacists were let in, embraced with open arms and even allowed a panel discussion.

But back to Sen. Lee and his loud and wrong opinion on ENDA.   You just made the case as to why the Employment and Non Discrimination Act needs to be passed and should have been prioritized over DADT repeal.

Even better for trans people, you made the case that we can take to some hardheads in the GL community as to why we need to be included in it and will not support a gay only version of ENDA. 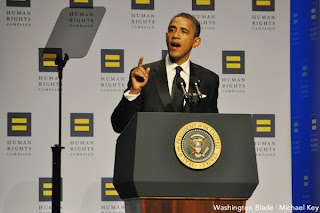 President Obama also has a dissenting opinion as well.

The work that we’ve done with respect to the LGBT community I think is just profoundly American and is at the heart of who we are.” Obama concluded in remarks at a high dollar Democratic fundraiser sponsored by Tim Gill on February 9.  The way to make progress is to foster an America “where everybody has a fair shot, everybody is doing their fair share, we’re playing by a fair set of rules, everybody is engaging in fair play.”

And if it escaped the attention of some of you peeps, transpeople are Americans, too.