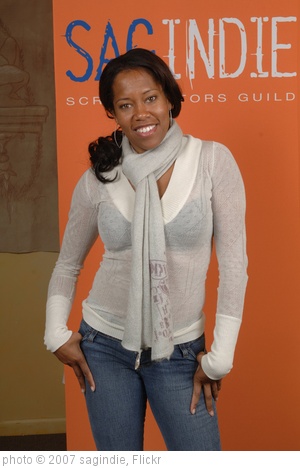 A guest post from Renee of Womanist Musings, who is all that and four bags of ketchup flavor potato chips.

One of the reasons I tune into Southland each week is for Regina King.  Though there are a lot of women in prime time television there are not a lot of women of colour staring in roles that reduce them to cheap stereotypes. Regina King plays, Det. Lydia Adams.

Lydia grew up in the hood and she is not policing it.  I do at times have a problem with the things she asserts in character like drugs and criminality being a choice, because Lydia was able to pull herself up by her bootstraps but I fully recognize that the message of meritocracy is something the media is very committed to despite the fact that it is in many cases impossible to achieve a positive shift in class location.  Considering that minority actresses and actors are often forced to say lines that are abhorrent to keep their jobs,  the character of Lydia is far from the worst of examples that appear on television.

Lydia lives with her mother and she has an active sex life for which she does not feel any shame.  She is committed to her job and she is good at it.  My only question in terms of casting has to do with the fact that in the last two seasons she has very specifically been cast with a partner of colour and it feels a little like racial segregation.

If we didn't live in a White supremacist, patriarchal society the fact that Regina King plays Det Lydia Adams, there wouldn't really be worthy of an comment.  The truth of the matter is that King is a rarity in mainstream entertainment despite the so-called post racial world and African-American president.


“I’m just really thankful to have the chance to portray a character you don’t see every day,’’ said King in between filming. “I have women come up to me all the time and say that exact thing to me. They say they love my character and how she is a real woman with a real career that they believe. People love to see themselves on screen in a way that makes sense and seems on point.”

“I’ve tried to be flexible in my career by doing a little bit of everything and that’s worked for me,” says King. “It’s incredibly hard out there for women of color. That’s why I do love being a woman of substance on Southland. Someone who isn’t a caricature and isn’t a stereotype. But remember she wasn’t written as a black character and that makes a big difference in how she can be portrayed.”

King credits the writers and producers of TNT and Southland for encouraging the development of characters based on true human portraits and not on preconceived notions and ideas.

“We’ve all worked together to make Lydia an interesting person that isn’t based on being a girlfriend or sidekick on the show, which is something totally different in terms of writing and acting,” said King. “It’s great to work and have those kind roles, but it’s also great to have the key scenes and be the key character. It’s good for it to be about you sometimes.’’ (source)

What we should be asking is why King is the exception to the rule rather than the rule?  It's not just Black women that are subject to this sort of erasure?  Where are the women of colour in primetime, who are playing characters of substance?  If you turn to reality television, we exist to either be the token Black girl (I'm looking at you Bachelor), or we exist to be shamed for being ghetto, angry, loud or just generally unwomen?  There is a much greater chance in seeing a Black woman show up in an episode to be a prostitute, drug user, or an abusive mother.


Time after time we have heard Black women complain about the lack of good roles available to them, and yet nothing has changed.  It certainly does not help matters that the only ones consistently talking about this issue is us.  Every time I come across a feminist blog talking about roles for women in the media and declaring the degree to which they are feminist, I always wonder to myself when if ever are they going to note that at least they are seen, while we remain largely invisible?  Part of a feminist analysis of media should include the inclusion of marginalized women and yet it continues to be sadly lacking from our so-called allies.

It is my belief that it is even more important for women of color to see positive images of ourselves in the media than it is for White women, because we don't have the shelter that Whiteness to help mitigate the harm that sexism causes.  We don't need anymore Black sidekicks, girlfriends, or BFF's.  I am sick to death of seeing Black women reduced to the role of support staff for White people.  Turning us into new age Mammies is not progress, it isn't even changing the discourse.

When we complain about this clear bias, we are once again labelled bitter, angry and even untalented.  Any excuse is drummed up rather than dealing with the ongoing active oppression of women of color. Socially, when think of womanhood, Whiteness is the automatic default and this is why as much as sexism is an issue for White women, they are not heavily invested in ensuring that woman means all women, rather than a very small select group.  Whiteness is dedicated to ensuring that whatever opportunities exist for advancement remain specifically in White hands.  This is why when they come to women of colour, with the typical but we're all women routine, I tend to role my eyes with frustration.  We may all be women, but we experience womanhood very differently. The truth of the matter is that we are only partners when you can exploit us.

This is why in everything I do, I commit myself to supporting the work of marginalized women. We cannot count on anyone to come to our aid, or speak about the various ways in which we are oppressed because it is a direct conflict with their unearned and quite frankly undeserved privilege. I am absolutely desperate to see more women in prime time like Regina King.  It is now the year 2012 and I still have not forgotten the fact that as a child, Clair Huxtable was the only face I could turn to who looked like me.  I know first hand the pain of erasure and as such, I cannot help but think about how tough the little Black girls born today will have it. I was shaped in ways I didn't even recognize as a child and I had parents who were very socially aware in terms of race.  Erasure tells us which bodies matter and it seems as far as the media is concerned, Black women still don't rate much mention.
Posted by Monica Roberts at 7:00 AM