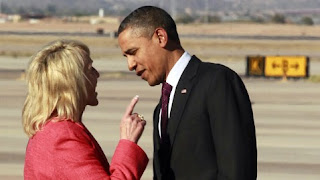 Duh, we African-Americans have been saying this for years    And no white liberals, some of y'all have been  just as bad as the conservafools in terms of disrespecting President Obama.

But I didn't call him (Dubya) that to his face.  Nor would I if I had the chance.  And that is the difference.

Now, the deal we have always had with Presidents is that we smile and talk nice to them when they're in front of us.  And then we cut them down and say horrible nasty things behind their backs.  This has always worked for 8th grade girls, and it's always worked for the United States of America.

But there is something about this president that makes conservatives think it’s okay to go ape shit in his presence. They didn’t do this Carter, an actual pacifist, or Clinton who really did have a plan for universal health care, or LBJ, who actually made it easier for poor people to vote and eat. All of them clearly, evil America haters, but they got treated with a modicum of respect, at least to their faces.


Not Obama. What can it be that’s different about him?


It’s either his race, or it’s your brain chemistry, or it’s something that happened when you dad spanked you and liked it, and you were looking at a box of Cream of Wheat. I don’t know. I’m not a therapist. Maybe, it’s not race? I don’t know what’s in people’s hearts. Except Newt Gingrich, I know what’s in his heart, lust and cheese fries.


But this type of in the room, in your face, in your space respect disrespect is new. Admit that, and I will admit that of course, something like impeaching Clinton was far more serious, but it was also at least in some ways more respectful. It was done with high pomp through official channels. It was all about the rule of law, and the Chief Justice wore a special robe he got from a musical, or something, and somehow that is a lot more respectful than this.


Not that if Obama ever did anything like Clinton did, he would even be alive. Can you imagine what they would do if they ever found out Obama had sex with a White House intern on Easter? Talk about colored eggs. He would have been impeached two times, one for each testicle. This president has had to be the Caesar’s wife of Pennsylvania Avenue, the Jackie Robinson of American politics, never reacting to the taunts from the stands. But after you do this to try to get his goat, what’s next? A wedgie? A purple nurple?

Gov. Brewer said she did this because she felt threatened. Right, like Obama ran his finger down his blouse and said, ‘you my white princess.’