It's a big day tomorrow in Baltimore County for Chrissy Lee Polis and the rest of our trans brothers and transsisters.

The Baltimore County Council will convene at 5:00 PM EST to vote on Bill 3-12, the human rights bills to add gender identity and sexual orientation to existing human rights statutes and add Baltimore County MD to the increasingly lengthy list of jurisdictions that do value their rainbow community citizens. 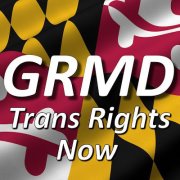 Bill 3-12 has already had two contentious hearings, with the Forces of Intolerance desperately trying to preserve their 'special right' to discriminate.
They have been sliming this much needed law with the usual 'bathroom bill' meme bull feces.  One major lie they were trying to pimp has already been thoroughly debunked.

But the haters will still repeat them anyway in the hope they get the desired result of Bill 3-12 being defeated or severely watered down.

So for those of you in the Baltimore area it would be incumbent upon you to be agents for your own liberation and let your county councilmembers respectfully know that you want the full menu of human rights, not an unjust public accommodations free bill.

Since the opponents are dragging in people from outside Maryland and Baltimore County into this human rights battle, it's in our best interests to help our trans brothers and sisters in Baltimore County beat back the haters.

If you can, you may also wish to show up at the hearing at 400 Washington Avenue in Towson, MD clad in purple to express your support for the bill without amendments.