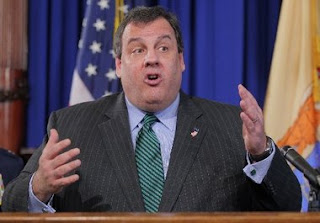 Well, well well, isn't this interesting that another white male Republican governor acts as an oppressor to the GL(bt) community and the GL boys and girls are shocked, shocked that it happened.

And especially the clueless sellouts in GOProud.

Gov. Chris Christie did what Republican governors with a national audience usually do in this situation and vetoed the gay marriage bill a day after the New Jersey legislature passed it by a 41-33 margin in the NJ Assembly and a 24-16 margin in the NJ Senate earlier in the week.

Elections matter people.   Did you GL peeps in New Jersey (and elsewhere) really think that a northeastern GOP governor that is being considered as a 2012 vice presidential nominee and is a favorite for the 2016 presidential nomination in the Republican Party would sign that bill?   You don't need a doctorate in political science to know the answer to that question.

And how did the vanillacentric privileged readership in the gayosphere react?   By being justifiably angry about it.  But unfortunately some rainbow peeps stooped to the level of engaging in fatphobic attacks on Christie.

I was really bothered by one I saw in the Queerty comment threads on the veto story with commenter CBRad combining fatphobia with misgendering bigotry in the insult this waste of DNA aimed at Christie.

CBRad, this is Pam Spaulding.  The editrix of Pam's House Blend is not only a cis female since it escaped your ignorant attention, she's happily married to her partner Kate as well.

Note she doesn't look like Chris Christie, especially since she's African-American and he ain't.  She is also one of the people in the Afrosphere I have mad respect for.
.
Even though Pam and I respectfully disagree on just how much attention should be focused on marriage equality in the rainbow civil rights movement vis a vis ENDA and other pressing issues, one thing we see eye to eye on is that we are both proud African-Americans who believe trans and SGL peeps in our community need to be involved in pushing rainbow human rights issues.

But you misgendering Pam was a low blow I and other African-Americans didn't fracking appreciate. 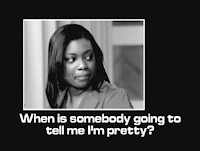 I'm tired of Black women trans and cis being misgendered and having unwoman shade hurled at them by ignorant people wallowing in vanillacentric privilege.

It was also uncalled for especially when she's a longtime supporter of marriage equality and ossifies the perception of non-white members of the GLBT community that we are only members of it at your whim or when you want melanin in the photos of your events to prove how diverse you are.

CBRad, if you and the rest of the like minded GL community peeps want to fling juvenile insults at Chris Christie all day, that's on you.   Still doesn't change the fact he vetoed the NJ marriage equality marriage bill and doesn't get you any closer to making it happen in New Jersey or anywhere else in this nation.  .

Posted by Monica Roberts at 8:45 AM