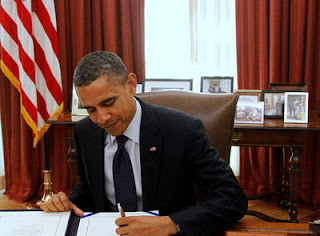 NATIONAL AFRICAN AMERICAN HISTORY MONTH, 2012
- - - - - - -
BY THE PRESIDENT OF THE UNITED STATES OF AMERICA
A PROCLAMATION
The story of African Americans is a story of resilience and perseverance.  It traces a people who refused to accept the circumstances under which they arrived on these shores, and it chronicles the generations who fought for an America that truly reflects the ideals enshrined in our founding documents.  It is the narrative of slaves who shepherded others along the path to freedom and preachers who organized against the rules of Jim Crow, of young people who sat-in at lunch counters and ordinary men and women who took extraordinary risks to change our Nation for the better.  During National African American History Month, we celebrate the rich legacy of African Americans and honor the remarkable contributions they have made to perfecting our Union.

This year's theme, "Black Women in American Culture and History," invites us to pay special tribute to the role African American women have played in shaping the character of our Nation -- often in the face of both racial and gender discrimination.  As courageous visionaries who led the fight to end slavery and tenacious activists who fought to expand basic civil rights to all Americans, African American women have long served as champions of social and political change.  And from the literary giants who gave voice to their communities to the artists whose harmonies and brush strokes captured hardships and aspirations, African American women have forever enriched our cultural heritage.  Today, we stand on the shoulders of countless African American women who shattered glass ceilings and advanced our common goals.  In recognition of their legacy, let us honor their heroic and historic acts for years to come.

The achievements of African American women are not limited to those recorded and retold in our history books.  Their impact is felt in communities where they are quiet heroes who care for their families, in boardrooms where they are leaders of industry, in laboratories where they are discovering new technologies, and in classrooms where they are preparing the next generation for the world they will inherit.  As we celebrate the successes of African American women, we recall that progress did not come easily, and that our work to widen the circle of opportunity for all Americans is not complete.  With eyes cast toward new horizons, we must press on in pursuit of a high-quality education for every child, a job for every American who wants one, and a fair chance at prosperity for every individual and family across our Nation.

During National African American History Month, we pay tribute to the contributions of past generations and reaffirm our commitment to keeping the American dream alive for the next generation.  In honor of those women and men who paved the way for us, and with great expectations for those to follow, let us continue the righteous cause of making America what it should be -- a Nation that is more just and more equal for all its people.


BARACK OBAMA
Posted by Monica Roberts at 10:00 AM