San Francisco, CA – On Saturday, February 25, “Come Together,” a town hall discussing the importance of building coalitions within the transgender community, will take place at City of Refuge – United Church of Christ, 1025 Howard Street, San Francisco, Calif., 11 AM – 4 PM PST.  The event is free and open to the public.
Studies show that transgender people face injustices in housing, health care, employment, and many other areas. Transgender and gender non-conforming people of color are hit the hardest. They are also more susceptible to anti-transgender violence than other racial and ethnic groups.
“This is the first ever national focus on transgender people of color,” explains Kylar Broadus, founder of the Trans People of Color Coalition (TPOCC), a national organization dedicated to challenging racism and transphobia, and the main sponsor of the event. “It is critical that we empower people to advocate for themselves as we build this movement.”
The town hall is the third in a series of national town halls to discuss issues affecting and impacting trans people of color.

The first of its kind was held last year in Charlotte, N.C. where then city council candidate, LaWana Mayfield, now the newly elected and the first openly gay city council member in Charlotte, spoke about claiming our authenticity to break down barriers and build relationships.

“We’re honored to be hosting this event for our trans brothers and sisters,” says City of Refuge United Church of Christ’s Minister BobbieJean Baker. “It’s an opportunity to collaborate, strategize and celebrate the Creator's diversity.” 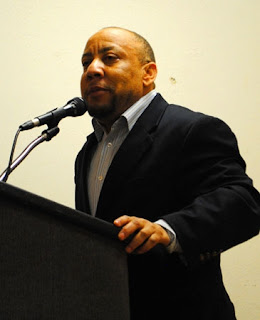 The town hall will be led and moderated by Broadus, who founded TPOCC in 2010. “We want to give transgender people of color a sense of self and community,” he adds. “There are many of us that don't feel that we're being heard or connected to any movement.  There is no one that can tell our story better than us; we live it daily and we have a voice.”
“Come Together” is sponsored in part by the National Center for Lesbian Rights and the National Trans Ministry: TransSaints of the Fellowship of Affirming Ministries, an online network connecting transgender faith community leaders together for empowerment.
To learn more about the Trans People of Color Coalition, visit www.transpoc.org.
Posted by Monica Roberts at 6:00 AM