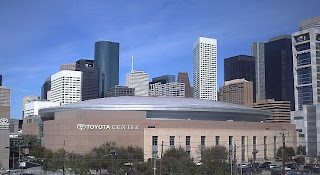 We recently received the wonderful news here that the 2013 NBA All Star Game will be played on Sunday, February 17 in beautiful downtown Houston.

In addition to the 62nd NBA All-Star Game being played at the Toyota Center, it will also host the NBA Rising Stars Challenge and NBA All-Star Saturday Night.   The NBA All-Star Jam Session, the hugely popular interactive basketball celebration, will be held at the George R. Brown Convention Center.
It'll be the third NBA All-Star celebration hosted by Houston, and my hometown proudly hosted the event in 1989 and most recently in 2006.

So now that you are aware of it, you have a year to book some cheap airline flights and come on down and experience some Lone Star hospitality.  You may even see me wandering around downtown and the George R Brown with my Rockets gear on.

This year's edition of NBA All Star weekend is happening in Orlando on February 24-26 and I'll probably watch a little bit of it along with the skills contests that Saturday.

It's also Friday, and as you longtime TransGriot readers know that means it's time for the TransGriot to select this week's Shut Up Fool Award winner.

It's tome for Moni to determine with you TransGriot readers help what fool, fool or group of fools continue to exhibit All Star level stupidity and ignorance and deserve to be recognized for it.

These SUF awards also continue to point out what my Shut Up Fool inspirational mascot Mr. T says, fools are everywhere.

So enough jibber-jabber, time to get to SUF business. 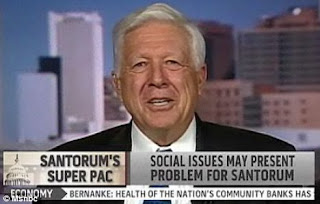 He opened this mouth during an MSNBC interview yesterday with Andrea Mitchell to make this jaw dropping comment that momentarily rendered the veteran journalist speechless.

'You know, back in my days, they used Bayer aspirin for contraception. The gals put it between their knees, and it wasn't that costly.'

He (and Santorum) then cluelessly tried to pawn off his conservaignorance as a joke during a later MSNBC interview with Lawrence.O'Donnell

I think it's time for the Republican Party to change their party mascot from the elephant to a woolly mammoth with a Klan hood to more accurately reflect where their party is in 2012, building that bridge back to the 20th century BCE.