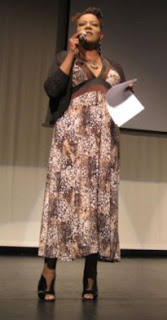 Well, did you have fun getting your learn on and discovering something about Black trans history?

I hope you did, and here are the answers I promised y'all to the questions I posted Monday.  It was an open Internet test BTW and the answers could be found not only in the TransGriot archives but also by hitting Google.

And now, the answers to the second annual TransGriot African-American Trans History Quiz.

1.  Transman Kylar Broadus founded an organization to lobby for the human rights of transpeople of color.  What is the name of that organization and what year was it founded?

3. True or False:   An IFGE Trinity award has never been won by a Black trans man.

5. This transperson was the first to perform for a sitting US president.  Who is she?

6. What transwoman uttered this quote?  "I defy any doctor in the world to prove that I am not a woman.”   Bonus points if you can also answer what state she was born in.
Lucy Hicks Anderson     She was born in Waddy, KY

7. Transwomen Patti Shaw and Diana Taylor have this in common.  What's the link?

They were both harassed by the police departments in their respective towns and sued them.

8.  In what city will the first annual Black Transmen Empowerment Retreat Dinner and Conference on march 29-April 1 take place?

10. This transwoman made Diddy's Band in 2009 and in the process became the first transperson to actually win a reality television show competition.  Who is she?

11. There have been three autobiographical books written about or by African-American transwomen.   Name them.

A Finer Specimen of Womanhood by Sharon Davis, Hiding My Candy about the Lady Chablis and I Rise by Toni Newman

12.  This transwoman in November 1995 confronted job discrimination aimed at her on a college campus.  Name her and the school that perpetrated it.
Sharon Franklin Brown   The school was Fayetteville State in North Carolina

13.  Miss International Queen runner up and London resident Miss Sahhara was originally born in this African nation.   Name it.

14. This internationally known trans human rights warrior is from Uganda.   What's his name.

15. What happened to Washington DC friends Stephanie Thomas and Ukea Davis on August 12, 2002?

They were brutally murdered .

16.  What is the name of the organization that Miss Major is the executive director of?

17.  Name the two ballroom houses that Octavia St Laurent was part of.

The House of St Laurent and House of Manolo-Blahnik

18.  True or False:  The National Transgender Advocacy Coalition's first board chair was an African American transwoman.

True.  Dawn Wilson was the founding board chair until being succeeded by Yosenio Lewis

19. This transwoman is chronicled in a 1979 JET magazine article that discusses her life, her discrimination suit suit against GM and her founding of a Detroit gender organization.   Name her.

20. Toni D'Orsay now runs this Phoenix based organization founded by Regina Gazelle.  Name it.  Bonus points if you can also name what the letters in the group's name stand for.

This Is H.O.W.     H.O.W. stands for Honesty, Openmindedness, Willingness

21. What college did trailblazing NCAA division one trans athlete Kye Allums play for and what was his sport?

22. Video blogger Diamond Stylz was the plaintiff in a successful ACLU discrimination lawsuit that allowed her to wear her dress at her high school prom.  What year did it occur and bonus points for the state it happened in.

23. What continental African trans woman wrote this and bonus points if you can name the country she's from?  'I don't think saying something derogatory to someone who has insulted you is being unladylike. And maybe trans women need to knock it off with this perpetual ladylike garbage. Sometimes you can't be ladylike. Circumstances preclude that.'

24. This transman was featured in the book 'Love Makes a Family' , a supporter of COLAGE and was a presenter at several True Spirit conferences in the late 90's.  Name him.

25. True or False:  The TransGriot is the first Texan to win the IFGE Trinity award.