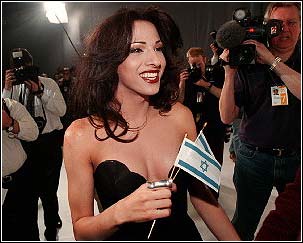 The multinational Eurovision song contest is the world's most watched non sporting television event, averaging over 120 million viewers annually.    It launched the careers of ABBA (1974), Celine Dion (who competed for Switzerland in 1988), Katrina and the Waves (1997), several eastern European music stars and a transsexual singer from Israel named Sharon Cohen.

She's better known by her stage name of Dana International.   When she won the Israeli K'dam Eurovision selection contest after finishing second in 1995, drama was stirred up by Israel's Orthodox Jewish community and Israeli conservatives who had a problem with a transperson representing the nation at Eurovision 1998.    They attempted to strip her of the title but failed.


She got the last laugh on her transphobic Israeli critics when her song 'Diva' won, subsequently sold over 400,000 copies and hit the Top Ten on the music charts of five European countries. .

She also slammed her critics back home with her 'Message of Reconciliation' in the wake of her 1998 Eurovision win. "My victory proves God is on my side. I want to send my critics a message of forgiveness and say to them: try to accept me and the kind of life I lead. I am what I am and this does not mean I don't believe in God, and I am part of the Jewish Nation."


Now Dana International is headed back to the Eurovision event not as a former champion or guest, but as a repeat contestant. She won Israel's K'dam 2011 selection contest and is headed to Düsseldorf  with one called 'Ding Dong'.

Seriously, that's the name of the song.


We'll also have to see not only what Jean Paul Gauthier gown she pulls out for this Eurovision event this May, can she make Eurovision history by being the first person ever to win it twice?.