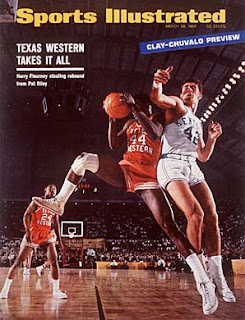 March Madness has started its opening weekend of thrilling basketball games to determine the men's and women's NCAA champions for this 2010-11 season.   But 45 years ago today an NCAA championship game was played at Cole Field House on the University of Maryland campus that not only was one of the biggest upsets in NCAA history until a certain 1983 NCAA championship game made me sick to my stomach, it had a seismic impact on the collegiate game and society itself. .

On March 19, 1966, the unheralded and third ranked Texas Western Miners (now UTEP) were facing the number one ranked and heavily favored Adolph Rupp coached Kentucky Wildcats.    At the time teams in the SEC, ACC, and the Texas based SWC didn't recruit African American players for racist and stereotypical reasons.

It wasn't the first time that black players had started in an NCAA championship game.   Just three years earlier in the NCAA championship game Loyola started four Black players and Cincinnati three as Loyola upset the defending champs to take the 1963 NCAA title.   The Miners were the first team to have five African-American  players not only take the floor of a regular season NCAA game, but the floor of a NCAA title game as well, something we don't even think about now.

Texas Western opened the game with a thunderous dunk by Houstonian David Lattin, took the lead midway through the first half and never relinquished it.  Despite determined runs by 'Rupp's Runts' that shrunk the Texas Western lead to a point, the Miners  eventually won a thrilling 72-66 game to secure their  first NCAA championship.

The kids at Texas Western just wanted the game more.  They were playing not just for an NCAA  championship, but for the dignity of a people.

Interestingly enough, the NCAA banned dunking from 1967 until 1976 probably due to the success of Texas Western and the imminent arrival of Lew Alcindor (later Kareem Abdul-Jabbar) at UCLA

The game would also be depicted in the 2006 movie Glory Road as well.

There have been plenty of NCAA title games since then, but none with the far reaching social and historic influence of this one.