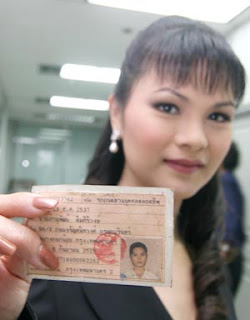 One of the things that is a common problem for transpeople no matter where we reside on this planet is our identity documents.   Far too many national governments instead of making the process as drama free as possible, throw up roadblocks to doing so.

That inability to have identity documents that match our gender presentation can cause complications in our lives and open us up to embarrassment, discrimination or transphobic harassment.

When we have to travel internationally, passports or ID's that don't match the current gender presentation can subject us to denial of entry into the country we wish to visit, harassment or worse by customs officials.

Transpinays and other Asian transwomen are reporting that when they travel to Hong Kong, they are being harassed by customs officials there


There was a recent example of what can happen according to an online article on the Al Masryalyoum website .

A post op Arab transwoman and a transman were both recently denied entry into Egypt recently.   They had arrived at the Cairo airport on a flight from Amman, Jordan and the Cairo airport officials noticed a 22 year old transwoman of 'outstanding beauty' disembarking from the arriving international flight.


When she presented her passport, it still had her old male birth name in it.  She told customs officials that she had undergone GRS six weeks before but hadn’t been able to modify her passport data.

On the same flight was a 19-year-old transman holding a passport with his old female birth name and because of the same problem.   He'd undergone surgery and also wasn’t able to update his passport in time for his trip.

Both passengers stories checked out, but they were denied entry into Egypt and sent back to Jordan

This situation is one reason why the US State Department made the decision they did last summer to allow transpeople to do gender marker changes on US passports without requiring surgical intervention.