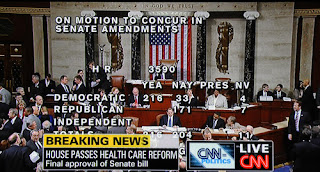 The Patient Protection and Affordable Care Act, AKA the Health Care Law is one year old today.   I would rather have universal single payer health care like Canada and the rest of the civilized world has, but it's a start.

The GOP's still lying and trying to kill this bill, but as they're finding out the more the truth comes out about the health care bill and what it positively does for people and the clock ticks inexorably toward the 2014 date of full implementation of the law and its provisions, the better the knowledge deprived American public finds out about it and what it positively does for them, the better they like it.. 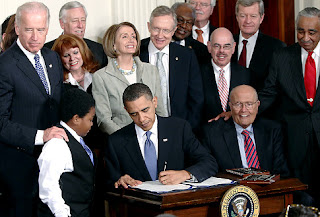 I think it's a travesty and a shame that one of the wealthiest countries on the planet has such piss poor health care for its citizens, and it is an embarrassment to me as an American we don't have Universal Single Payer health care like other comparable industrialized nations.

Yes, the health care reform bill signing to paraphrase Vice President Biden, was a big fracking deal.   One of the many reasons I want the GOP bums thrown out of power on November 6, 2012  and President Obama to get a second term is to continue the work toward ensuring that all Americans have access to affordable high quality health care.

I know that it won't happen with a Speaker Boehner or the Republifool Know-Nothings in charge.