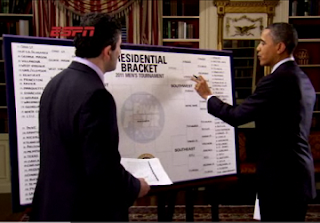 One of the things the president has done since entering office is take a few minutes like 'errbody' else in the country does every March including the TransGriot and fill out brackets for the men's and women's NCAA tournament that gets revealed during an ESPN show and one the White House website..

One of the things I wanted to do on the show was, as people are filling out their brackets -- this is obviously a national pastime; we all have a great time, it’s a great diversion.  But I know a lot of people are thinking how can they help the Japanese people during this time of need.  If you go to usaid.gov -- usaid.gov -- that will list all the nonprofits, the charities that are helping out there.  It would be wonderful for people to maybe offer a little help to the Japanese people at this time -- as they’re filling out their brackets.  It’s not going to take a lot of time.  That's usaid.gov.  It could be really helpful.

But you know the conservafools.  The credits hadn't even finished rolling before the usual suspect conservafools attacked.

Newt Gingrich tweeted yesterday that America needs "a commander in chief not a spectator in chief," insisting Obama was "hiding from his job behind NCAA picks."

Faux News piled on along with RNC chair Reince Priebus and Oxycontin Man.

If this man was in a radiation hazmat suit and dumping water on the damaged Fukushima reactors himself or personally leading the anti-Khadafy rebels in Libya, they'd still find a way to hate on him.