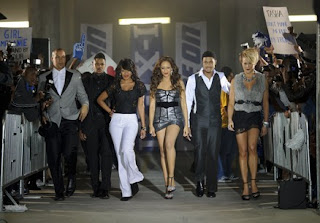 At 9 PM CDT I'm tuned into BET (yes, BET) for my weekly dose of The Game.    The Mara Brock Akil produced show was on the CW for three seasons until it was canceled.   It was revived and picked up by BET due to a write in campaign initiated by its many fans, and the opening season 4 episode drew 7 million viewers.

And what a season.   We've seen the now married Dr. Melanie Barnett-Davis do a failed paternity test on DJ, watched Jason get cut from the Sabers,  Tasha date a younger man and drive him away, Kelly's reality TV show bomb, and Jason and Kelly actually crack down and become parents to an out of control teenage Brittany.

Speaking of out of control, Malik's life descends to a dark place to the point where he ends up in rehab, falls in love and just when he climbs out of that hole, ends up in another one with the Sabers owner when he finds out Malik has been sleeping with his wife who the owner has badly disrespected.

Hmm, wonder what Season 5 has in store for us?

Posted by Monica Roberts at 4:25 AM