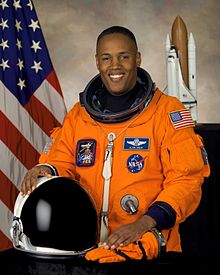 As I continue to point out, every month is Black History month.   Sometimes Black history is being made in our current timeframe and isn't as obvious as the first Black president and FLOTUS occupying the White House
.
One such instance is the current STS-133 mission of the space shuttle Discovery.  One of the astronauts taking part in this mission is African-American.

Air Force Colonel B. Alvin Drew is on his second shuttle mission to the International Space Station, and one of the 14 African-Americans who have been launched into space.

On February 28 when he ventured outside the ISS with astronaut Steve Bowen, he not only became the fifth African American astronaut to perform an EVA, but the 200th person to walk in space.

This STS-133 mission is also notable for the fact it is the last one for the space shuttle Discovery, which will be decommissioned and sent to a museum after the completion of this flight.

It is cool to know that an African-American astronaut is taking part in not only writing another chapter of our nation's spacefaring history, but Black history as well.