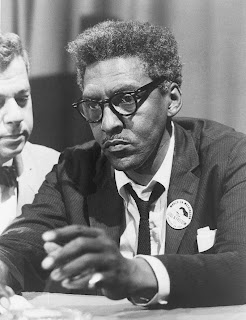 Today is not only St Patrick's Day, but the 99th birthday of civil rights icon Bayard Rustin, who was born in West Chester, PA on this date in 1912.

Rustin was one of our trailblazing leaders who was an advisor to Dr. Martin Luther King, Jr on the principles of non violence, helped Dr. King organize the Southern Christian Leadership Conference, was the chief organizer of the 1963 March on Washington, a behind the scenes leader in the Civil Rights Movement, a trustee on University of Notre Dame's Board of Regents in the early 70's, a founder of the A. Philip Randolph Institute and a human rights and election monitor for Freedom House.

He not only was a civil rights movement hero, Rustin was also a trailblazing leader in the gay rights movement.   He testified on behalf of New York's Gay Rights Bill and said this in his 1986 speech the 'New Niggers Are Gays':

Today, blacks are no longer the litmus paper or the barometer of social change. Blacks are in every segment of society and there are laws that help to protect them from racial discrimination. The new "niggers" are gays. . . . It is in this sense that gay people are the new barometer for social change. . . . The question of social change should be framed with the most vulnerable group in mind: gay people 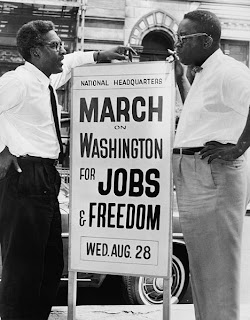 According to the New York Times, Rustin once wrote that 'The principal factors which influenced my life are 1) nonviolent tactics; 2) constitutional means; 3) democratic procedures; 4) respect for human personality; 5) a belief that all people are one.

Feel you on all of that Brother Rustin.    Hope we are throwing a serious party for your Centennial birthday next year or the planning for it is in the works..

And for you haters, especially in the African-American community who ignorantly assert that gay peeps have 'done nothing for our people', the life of Bayard Rustin is a powerful rebuke to that bull feces.