And the Inequality Maryland Borg ain't liking it.

InEquality Maryland has failed in its primary mission of getting same gender marriage passed in the state.  Now that they desperately need a legislative win in the state that surrounds three quarters of Washington, DC they have turned their attention to passing a flawed HB 235 trans rights bill.


Despite the fact that organizations, local and national noteworthy transpeople and Maryland trans residents have told the Gay, Inc crowd represented by Morgan Meneses-Sheets and her EQ MD friends that HB 235 without public accommodations language is worthless, they seem to have adopted the 'resistance is futile' attitude and are merrily trying to assimilate public opinion and force a bill down the throats of the Free State trans community they don't want..

And they don't care how HB 235 affects transpeople and future trans rights legislation that we'll attempt to pass in other states.    All they care about is winning. 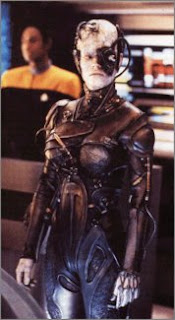 In addition to assimilating various trans drones to their way of thinking, the EQ Maryland Borg have embarked upon a disinformation campaign designed to mask the fatal flaw of HB 235.  It includes bamboozling allies into supporting the bill without telling them it will cause harm to us,  an attempt to try to name the bill for slain Baltimore transwoman Tyra Trent, slanted articles in media outlets such as the Metro Weekly and the influential GL oriented paper the Washington Blade, and not telling the truth during the legislative hearing and in subsequent conversation on the bill that it is worthless without public accommodations language.

I found it interesting that they had Lisa Mottet of The Task Force's Transgender Civil Rights Project testify in favor of a bill that doesn't have public accommodations language in light of the fact they just released a report in conjunction with NCTE entitled 'Injustice At Every Turn' that spends more than a few pages documenting the public accommodations problems that transpeople encounter.

EQ MD has also been called on another one of their major talking points.   It claimed that it would protect trans people in homeless shelters, an issue we had crop up here in Houston with the treatment of trans and LGI youth in Covenant House shelters that was recently resolved.  HB 235 as currently constituted would not protect trans people from discrimination.

The embattled EQ MD forces have disabled comments on their webpage, been engaged in removing comments from their Facebook page that point that inconvenient fact out, attacked bloggers critical of them that have gotten the word out about this issue, and derailed any threads in the Gayosphere and Transosphere that discuss the unjust HB 235 bill.

The Cathy Brennan drone has been tasked with that trans oppression mission, but is getting major pushback from people who have pointed out her role as a trans oppressor in 2001.    She was part of the Free State Justice group that cut transpeople out of the inclusive Maryland bill that (surprise, surprise) has public accommodations language.  Transpeople being cut out of the 2001 bill is why we're having to refight this battle now..

They have even tried to claim that Del. Joseline Pena-Melnyk, the sponsor of HB 235 was allegedly threatened by trans opponents of the bill, but when pressed on that couldn't produce any credible evidence to back that accusation up.

Inequality Maryland is finding out that resistance is NOT futile.   The trans community in Maryland held a protest at the Supreme Court building highlighting the fact that if this bill passes, it would probably be ruled unconstitutional

They have also sent that message loud and clear they aren't going to accept legislative crumbs or so called fauxgressive allies and trans sellouts trying to force them down our throats, either.

Live long and prosper Maryland trans community, and keep up the good fight.