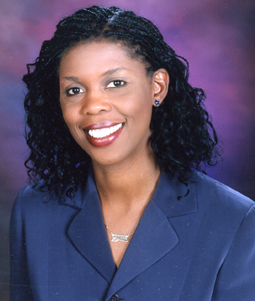 Star Parker is the founder and president of a non profit organization called CURE, The Center for Urban Renewal and Education that ccording to her bio, is 'a think tank that provides a national voice of reason on issues of race and poverty in the media, inner city neighborhoods, and public policy'.

What she doesn't say is that she's a right wing shill who is deployed when they want a non-white someone to attack social programs in conservative media and pimp their message.

Parker's personal story is that she had several abortions, was on drugs and welfare before becoming a born again Christian.   She returned to college and started a business that was destroyed during the 1992 LA Riots.

You can see her on Fox noise and various other networks regurgitating right wing talking points, and see he column in various papers from time to time.

Like all the conservanegros, she's written three waste of tree books, and spoke at the 1996 Republican National Convention.   In 2010 was part of that large group of Black Republicans who ran for office and ran in California's 37th Congressional District against incumbent congresswoman Laura Richardson.  Despite a $1.1 million campaign war chest, an outside conservative group running $50,000 worth of negative ads on her behalf and endorsements from Newt Gingrich and Sarah Palin, Rep. Richardson easily won reelection to a second congressional term by a 78.3%-22.7% margin.

But we haven't seen the last of Star Parker, and you'll definitely see her cookie chomping visage on a television screen near you.
Posted by Monica Roberts at 12:00 AM