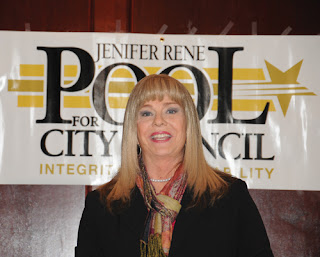 As the HB 235 drama is proving, we're going to have to start electing our own people to public office.   That's the ONLY way we can ensure that we won't get screwed when it's time to pass civil rights laws that benefit us.

In Houston, while we get great support from our elected councilmembers, it's just time to elect one of our own people to office.

In this 2011 city election cycle we have a transwoman running for Houston City Council in Jenifer Rene Pool.  She's been a declared candidate for a few months and I'm already starting to see her signs pop up since she's an at large candidate.

If Jenifer wins she would not only be our first out transperson elected to Houston city council, she'd be the first in Texas and also the first elected to one in a city over one million in  population.    Monica Barros-Greene of Dallas was the last transperson to attempt to win a large Texas city council seat back in 2005. 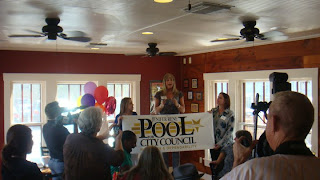 No hate from our fundie foes Dave Welch or Hotze's Nazis yet, but I expect it by the time the campaign.gets into the home stretch.

Others are waiting to see how the new reapportioned and redrawn city council single member district boundaries shake out before they declare one way or the other.

She now has her website online, so check it out.