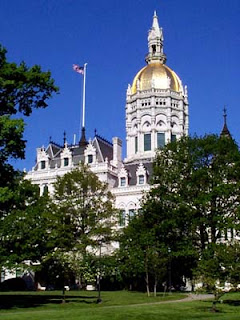 TransGriot Note. Unlike the unjust law that Inequality Maryland is trying to foister on the trans community against its will, HB 6599 in Connecticut is a trans rights bill done the correct way, as a just law that includes public accommodations language.    The public hearing on HB 6599 was held yesterday.

Honorable Co-Chairs and Members of the Judiciary Committee:

Thank you for allowing me to testify in favor of HB 6599 An Act Concerning Discrimination, to prohibit discrimination based on gender identity and expression. My testimony's point is to show how it is possible to successfully transition from one gender to another at the workplace with no problems.

My name is Deja Greenlaw and I am a transgender woman who lives and works in Enfield, Connecticut. I have worked for the same local Fortune 500 company since 1993. I transitioned from male to female in 2007. It's going on four years now and I never had any issues at my workplace. My company was very well versed in assimilating transgenders into the workplace as precedents and policies had been set before 2007. I was lucky. Most employers do not have any precedents and policies in place and far too many of my transgender brothers and sisters have lost their jobs because of this fact.

A little about my personal life -
I was very closeted for decades and I tried my best to live as a male. I was too afraid to do anything else. I got married, fathered 3 children and supported my family the best I could while pushing my feelings way down, deep into my soul. It wasn't until September 11, 2001 when the twin towers were destroyed and the Pentagon was attacked did I realize that I had to move on my inner self before it was too late. Do you recall those days when suddenly America was no longer a safe place to live because of possible random terrorist acts? At any time, in any place, the possibility that you could be killed was now something to consider.

I turned 50 years old in October, just weeks after "9/11" and I realized that time was already growing short for me. I did not want to go to my grave never having given myself even the chance to explore who I truly am. I found local support groups and a very closeted community who were very afraid of being who they truly are in public because they feared the loss of their jobs if they were ever found out.

It was great to be able to express myself as a female identity at these very closeted, very safe meetings but it was awful not being able to express myself and my female identity in all the other times outside of these meetings. As time passed I became more comfortable with expressing myself as a transgender woman and I began venturing out in public expressing and identifying as female. It was a wonderful feeling to be able to be reaching the inner core and the inner peace of who I am. By 2007 I decided to transition from living as a male identity to a female identity. This included going to work as female.

As I stated earlier, my company had precedents and policies in place for me to make this transition at work. The transition went very smoothly and as I also stated earlier there have been no problems, no disturbances or no incidents at my place of work. I truly thank my company from the bottom of my heart for giving me the respect and the dignity for me to be myself on the job. I would like to have the same respect and dignity available for my transgender brothers and sisters. It is sometimes very difficult being transgender because of how society views us. We have been labeled as crazy, disturbed, delusional and I've been personally referred to as an abomination. These are some of the words that some folks have called us. We are none of those words. We are just who we are. We are just us. One day I hope that they will understand.

In conclusion I am asking the Committee to vote in favor of HB 6599. I am asking you to extend the same rights every other American has in the workplace to my transgender brothers and sisters. As living proof that it can work without incident I, Deja Nicole Greenlaw, ask you to support this anti-discrimination bill.

Thank you for your time.
Posted by Monica Roberts at 12:00 AM