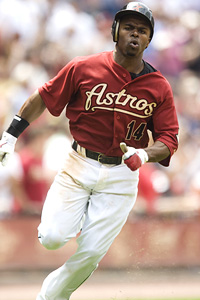 In a few hours major league baseball will begin to be played in stadiums  all across the nation.  The 162 game marathon to determine who will end up in the World Series representing their respective leagues begins.

As always, I'm rooting for my home team, the Houston Astros.   They will start the season being the guests of the defending NL East Division champs the Philadelphia Phillies and the experts not expecting them to be competitive in the NL Central Division..

But change is in the humid air here.  It will not only be a season in which we'll no longer have Roy Oswalt or Lance Berkman in Astro uniforms, the transition to a new core group of Astros players such as Hunter Pence and All Star center fielder Michael Bourn has begun.    The Astros Triple A franchise is now in Oklahoma City and Drayton McLane, the current Astros owner may be in the process of selling the team to a (thank God) Houston businessman..

We won't get our major league season opener here in Houston until April 8 and the Florida Marlins come to take on my fave baseball team at Minute Maid Park.

But as it does every Opening Day, hope springs eternal in all baseball fans.   Everyone starts 0-0, and with a few breaks, some consistent play and a few long winning streaks interspersed throughout the season who knows?    The Astros have a history of being a second half team and if they can stay close to the division leaders or even get off to a better start than the 0-8 one they did in 2010, they could contend.

Like I said, hope springs eternal in a baseball fan.   Go Astros!