Yo PETA, Guess Who's Starting For The NFC In The Pro Bowl 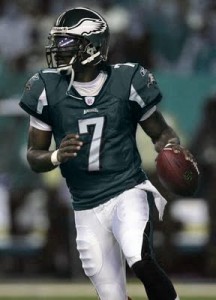 Was very happy to hear that Philadelphia Eagles quarterback and MVP candidate Michael Vick's comeback season has been capped off by his fourth appearance in the Pro Bowl.

He will be headed to Honolulu as the NFC's starting quarterback, assuming the Philadelphia Eagles don't have an engagement later in the week to play in Dallas for their first National Football League title since 1960.

I'm getting more than a little sick of PETA, conservafools and white peeps in general piling on Michael Vick and making it sound like he was the only person in the United States involved in dogfighting when we know that many of the people involved in that world look like y'all.

I'm also more than a little irritated about the fact that Vick served his two year stint  at Club Fed, got a second chance to play in the NFL, has been speaking to kids about how uncool dogfighting is and y'all still wanna hate.

What are y'all gonna do if he wins the NFL MVP award?   I guess second chances in life only count for people who don't have melanin in their skin, huh?


Congrats Mike on an amazing season.    I'll have to celebrate the January 30 occasion of that Pro Bowl by stooping by my nearest KFC and picking up a bucket for the game.