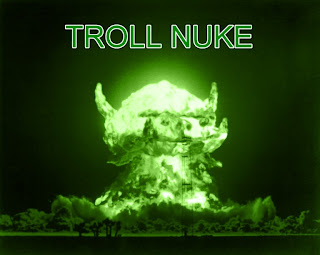 One of the cool things about the Net is that you can talk to people from around the world about various issues as I'm doing with the Canadian Trans Rights Bill C-389.

BTW, don't forget to continue being agents for your own liberation.  Keep calling, e-mailing, writing your MP's, sending these petitions in and telling them to support this bill.

It also means that the trolls from around the world come knocking at your cyberdoor, try to bumrush their way in and track mud all over your floors with their breathtaking ignorance.  .

Peep our latest Nuke A Troll winner.  It's Carrie Scaife from the Great White North.  I'm going to play along and assume for the purposes of this post she's a  'Real Canadian' with a blue birth certificate and Canadian passport to prove it. 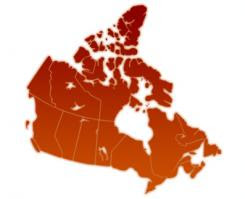 As far as I am concerned all the NDP National Party needs to give their heads a shake . They are sick to press this bill ....Siksay is the best name for the the NDP memeber who is trying to push this...he must be one of them .....


Carrie, unlike the previous peeps who are now setting off Geiger counters wherever they go,  at least you had the guts to proudly affix your first and last name to your stupidity, assuming that is your actual name.


Your e-mail address may state you're god-s-servant@bullfeces.com (protecting the guilty)  but you're more like Steven's oops, Satan's Helper.

The only person who's head needs a shake is yours.   The NDP, the PQ, and the Liberals are doing the right thing along with the folks who voted 143-131 last week to advance C-389 to Third Reading and a final House vote. .

If you are an 'alleged' Christian, you should abhor discrimination against any group.   I don't recall any scripture in the Good Book that reads 'hate thy neighbor because they're not like myself'. 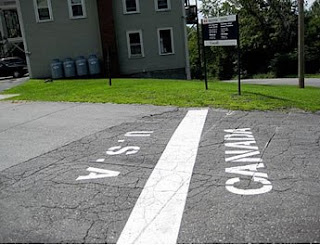 But then again you conservatives on both sides of the border have turned hatin' on marginalized groups into a political art form.

Speaking of sick,  since when did conservafools oppose expansion of civil rights in your country  for an oppressed group?   Oh yeah, silly me, you want to be more like your south of the border conservative Republican cousins who hate everything except military spending and cutting taxes for the rich..

MP Siksay is not trans if that's the 'them' you're babbling about in this comment.   Bill Siksay is a Canadian who abhors discrimination and believes that all Canadian citizens should be covered under the law.   This is the third time he's tried to pass this bill.

As Prime Minister Pierre E. Trudeau once stated, 'Canada will be a strong country when Canadians of all provinces feel at home in all parts of the country, and when they feel that all Canada belongs to them.'.

Right now not all Canadians feel at home in all parts of the country and nor do they feel that all Canada belongs to them.

Trans Canadian citizens deserve to enjoy the same rights under your nation's laws that you take for granted and want to deny to them because of your faith based ignorance. 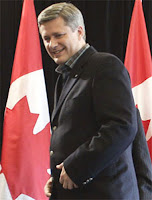 Canada does not just belong to you right wing Bible thumping Christopimps or only people who vote Conservative.   The Great White North belongs to all of you, including your fellow Canadians who happen to be transgender.

It's past time that Canada got on the morally correct side of this issue and made sure that the nation's laws protect its trans citizens as well..

Thank you for playing Carrie and we have lovely parting gifts for you.  You can pick up your ketchup flavored chips and your Timmy's coupon on the way out,.


Oh yeah, Carrie, duck and cover and don't look at the flash, eh?