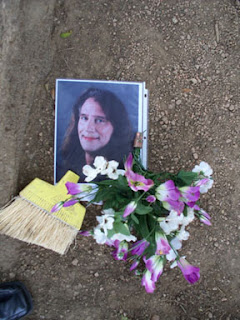 Two years ago today transwoman Jennifer Gale was found dead sleeping on an Austin sidewalk outside a homeless shelter run by the Salvation Army.  (one reason why I refuse to donate money or used clothing to them).

The reason she was outside on the sidewalk instead of inside the shelter is because they would not allow her to be housed with the women because of genitalia incongruent with her gender presentation. .   She would have been foced by their policies to be housed with cisgender men.

Austin was in the grip of unseasonable cold in 2008, and the postulation by EMT's is the near freezing temperatures helped trigger the heart attack that killed her.

Jennifer made multiple runs for political office in the area and was a frequent presence at Austin City Council meetings.  The night before she died,  Jennifer attended and spoke at an Austin city council hearing in which she sang 'Silent Night' to the assembled members before departing.

In honor of the second anniversary of her death, the Austin City Council at last night's meeting played the video (Jennifer's section of it starts at the 1:20 mark) from that fateful evening. They also dedicated in her memory a seat in the city council auditorium with a plaque bearing her name attached to it.

Jennifer's death also had an impact on a shelter up I-35 in Dallas.   The Bridge changed their policies in order to base their housing and intake decisions on the person's gender presentation irregardless of genitalia configurations.


Rest in peace, Jennifer.  You are not forgotten, nor will your trans brothers and sisters and all you loved and cared about you allow people to forget how you died.   We'll also bust our behinds to ensure that this doesn't happen to a transperson ever again.