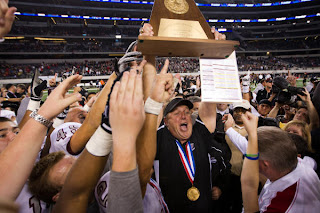 The Pearland High School Oilers that is.

The Oilers completed a 16-0 season for the ages to earn what they wanted for Christmas, the Texas 5A Division I football championship. 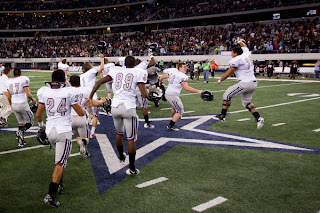 Playing in their first state championship game as a huge underdog to three time and defending state champion Euless Trinity, the Oilers knocked off the state number one and number one nationally ranked Trojans in their backyard 28-24 before a crowd of 43,321 at the 'Jerrydome'.

As they have done during the season and this playoff run, they did so in dramatic fashion.  Oilers running back and game MVP Dustin Garrison broke up the fourth down Trojan pass intended for Brandon Carter inside the five yard line with six seconds left to preserve the heart stopping win.

It was the fifth time during this magical season that the Oilers won in the final minute.   One of those wins was a dramatic 38-35 win over regional powerhouse Katy before 41,368 in the Region III-5A finals at Rice Stadium to help them earn their first state title berth in their school history.

This latest last minute win results in the 5A Division I title coming back to the Houston metro area..