Deer Turns Out To Be Doe 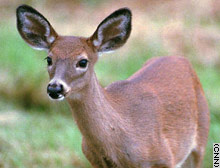 Okay...now that I got the obvious joke out of the way, let's get to the post..

For the scientifically illiterate and haters who continue to spout the right wing BS that intersexualaty or transsexuality doesn't occur in nature in an attempt to deny our very real existence on the planet, peep this story about what a West Virgina hunter discovered on December 15 when he shot what he thought was an antlered four point male deer.

Upon closer inspection Roger Mills discovered the 'male' deer was a doe.

Just another thing to make you go hmmm when it comes to gender identity..
Posted by Monica Roberts at 8:00 AM