2010 Texans Watch-Snatching Defeat From The Jaws Of Victory Again 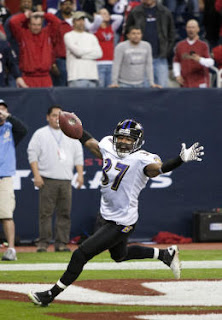 Spent a frustrating Monday night watching my fave NFL team sleepwalk through another lethargic first half in which they trailed 21-7 at halftime.

The Texans then come out of the locker room and give up a 103 yard kickoff return that included some piss poor tackling to fall behind 28-7 to the Baltimore Ravens.

And as is their pattern this NFL season, they wake up and start playing football.

The Texans mounted a furious comeback that included touchdown drives of 95 and 99 yards and the first two point conversion attempt of the season to tie the game with 21 seconds left in the fourth quarter only to lose it in overtime at Reliant Stadium 34-28.

After the defense forced a three and out on the Ravens initial overtime possession, Matt Schaub unleashes a second down pick six throw to Ravens cornerback (and son of former Houston Oiler fullback Tim Wilson) Josh Wilson to snatch defeat from the jaws of victory again. 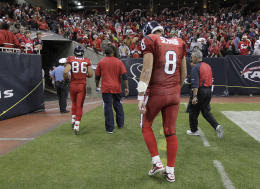 After starting the season running over the Indianapolis Colts and jumping out to a 4-2 record at the bye week and a first place AFC South tie, the local NFL ballers have now lost six of their last seven games to drop them to 5-8 and out of playoff contention.

To even finish with another underachieving .500 record they must run the table in their remaining games against Denver and AFC South foes Jacksonville and Tennessee.

Oh well, another no playoffs season for our local NFL squad.    At least they will be joined by the Arlington Cowchips in that regard.