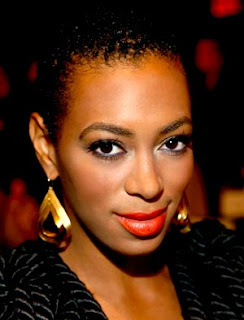 Damn, how did I miss this one?

According to BV's Black Spin seems a few weeks ago Bey Bey's baby sis Solange Knowles, the face of Rimmel London cosmetics, went off about Caribou Barbie dissing the POTUS and FLOTUS in her waste of trees book.

The half term quitter governor of Alaska called President Obama and the First Lady "unpatriotic" because they in her words spent "almost two decades in the pews of the Reverend Jeremiah Wright's church listening to his rants against America and white people."

Yeah, right Sarah.   Your born in Idaho behind is still hatin' because you lost Miss Alaska to a sistah.


But back to the post.    Unlike Beyonce, who is a little more guarded about sharing her opinions and political thoughts and the last time she did you feminists dissed her, little sis Solange will let fly with her political opinions and her thoughts.

"I'm SICK of Republicans shenanigans," Knowles tweeted in response. "Sarah Palin wants to call Michelle a racist? Says that they listened to rants about white people in church & that makes them racist. So did that make her (Sarah Palin) a racist when people at HER rally were yelling out 'That n-----'? By listening to that & not stopping it? The sad and scary thing is that these fools are in office," Knowles continued. "And just how many Americans will fall for the 'okie doke.'"

When an upset Twitter follower tried to suggest Knowles should not publicly tweet about her political views, Solange put the poor fool on blast.

"Don't want me to talk about what I believe? Please. ...Exit door awaits you gladly. ...Done lost yo damn mind boy."

If y'all thought I was selling y'all woof tickets about the widespread support that President Obama has in the African-American community and just how much we really do hate Republicans, you better ask somebody and not some Oreo cookie chomping sellout like Ron 'I kiss Dubya's behind' Christie.