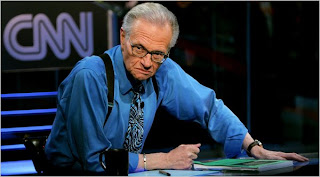 After doing over 50,000 conversational style interviews between his radio and television gigs and 25 years at CNN, talk show host Larry King is leaving the airwaves after his final show later tonight..

In a New York Times story,  he expressed no regrets about leaving his how which will be taken over by Piers Morgan, but noted the current state of the industry and his 9 PM ET competitors.

“If you look at media now,” he said in a telephone interview, “all the hosts of these other shows are interviewing themselves. The guests are a prop for the hosts on these cable networks. The guest to me was always paramount.”

And the one thing I liked that some of the 50,000 people that he's interviewed on the show included trans people and transpersons of color.

Larry, you are a class act.  We Americans and others who crave intelligent discourse on TV are definitely going to miss you.