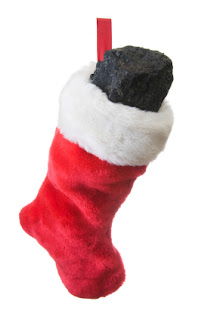 While the GL community is celebrating the passage and imminent signing of the DADT repeal into law by President Obama, pardon the trans community if we are feeling as though we just got handed another lump of coal in our civil rights Christmas stocking.

Once again the GL community threw us under the bus in order to selfishly pass legislation that benefits only them.

And nope, that's not just Moni talking.   Other trans themed blogs aren't feeling the love of the holiday season either on this issue.  It's also what Transgender American Veterans Association Vice President Angela Brightfeather pointed out in its press release..


"We now press our GLB brothers and sisters to finish the job and help provide the means for Transgender people to be able to serve their country openly and equally as do all Americans."


It's going to be interesting to see if the GL community is going to practice what they screech at the POTUS and be 'fierce advocates' for Autumn Sandeen and the trans community in terms of getting us the same ability to serve openly and proudly in our military that they loudly demanded for themselves.