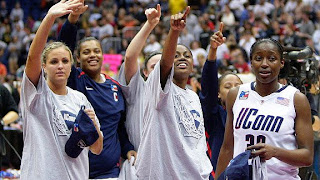 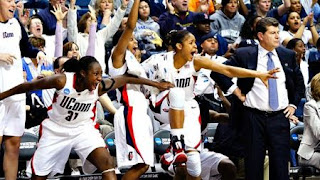 Since then no other NCAA program has come close to matching that level of sustained excellence until Geno Auriemma and the University of Connecticut women's ballers came along.


The Huskies complied a 70 game streak from 2001-2003  that included three straight NCAA titles before that streak was snapped in a 52-48 loss to Villanova in the Big East tournament finals.   That Diana Taurasi led squad shook off that loss and  marched through the NCAA tournament to take their fourth title over their archrivals Tennessee.

Their last loss was to Stanford on April 4, 2008 in the semifinals of the NCAA Women's Final Four.    Since then they have reeled off 87 wins in a row after dispatching Marquette 79-47 on December 9 and captured two NCAA titles in the process, with one being (win number 78) being at Stanford's expense. 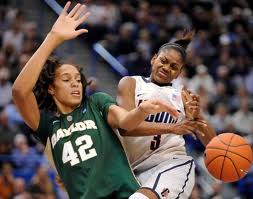 They came into this season with Maya Moore and some major question marks as to where they had what it took to continue The Streak.   They received a major scare from the then number 2 ranked Baylor Lady Bears and Brittney Griner in a narrow 65-64 win in Hartford but since then haven't even been threatened.

Now they seek to tie the 'untouchable' all time NCAA mark in a game versus an 8-1 Ohio State team that's being played fittingly at Madison Square Garden in New York and in front of what is sure to be a large television audience. .

If the Huskies win that one, they would play Florida State on December 21 for a chance to win game Number 89 and put themselves in the NCAA history books as one of the all time great collegiate basketball programs men's or women's.