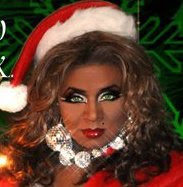 TransGriot Note: the Christmas photo is of Vanity Wilde, who hosts holiday theme parties for the Houston trans community (next one is December 18) , owns a transformation and makeover business and hosts an area  support group.


Well, we are exactly a week away from Christmas Eve and two weeks away from New Year's Eve and the last day of the first decade of the 21st Century.   Time sure does fly doesn't it?

One minute you're a kid eagerly crossing off the days on the calendar to Christmas day, the next minute you're having to deal with the three most dreaded words of the holiday season:   Some assembly required

Well, speaking of countdowns, get those nominees in for the 2010 Shut Up Fool of the Year.   You have until midnight December 30th to get those nominations in, and I'll announce this year's winner on New Year's Eve.

That's a nice segue into our business in this post, selecting this week's Shut Up Fool or group of fools
.
My work is never do in that regard, and I had a bumper crop of fools to select from    Palin, O'Reilly, Hannity, Gretchen Carlson....

But this week's Shut Up Fool! winner is Rep Louie Gohmert (R-TX)

Rep. Gohmert delivered a floor speech earlier this week during the DADT debate that allowing gay service member to openly serve the country 'would be a threat to the survival of the US'