Getting Into 'The Game' 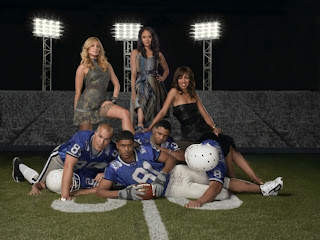 I was a huge fan of the Mara Brock Akil produced show Girlfriends and was more than a little upset when it was canceled.   But in the process of faithfully watching it when I had the opportunity I discovered its spinoff show called The Game that debuted in 2006.

There was an April 17, 2006 episode of Girlfriends entitled 'The Game' in which Joan Clayton's first cousin Melanie Barnett has decided to turn down Johns Hopkins Med School and put her career plans on hold in order to follow her collegiate athlete boyfriend Derwin Davis.  Joan of course tries to talk her cousin out of it and sticking to her plans of becoming a doctor.

The CW liked it enough to turn it into a show with debuted on October 1, 2006 with Tia Mowry playing Melanie and Pooch Hall playing Derwin.    Latasha 'Tasha' Mack is played by another of my fave actresses, Wendy Raquel Robinson, with Kelly and Jason Pitts being played by Brittany Daniel and Coby Bell. 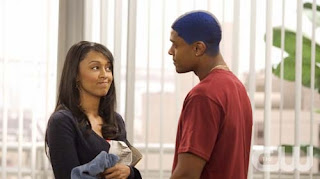 Derwin begins life as a San Diego Sabers rookie wide receiver as Melanie begins to juggle med school and being the girlfriend of a professional athlete.   She is introduced to Tasha, the mother of Sabers quarterback Malik Wright and Kelly, a former Sabers cheerleader who is the wife of wide receiver and team captain Jason.  Kelly is also president of the Sabers wives and girlfriends group called the Sunbeams.


They immediately advise her that being a girlfriend of a pro athlete is a full time job in itself and you have to watch out for the women that will come swarming after Derwin as the three of them become friends.

Over the three seasons it was on the CW there was plenty of drama, a lot of real life NFL athletes and Hollywood and music stars doing cameo roles on it before the show  was canceled in May 2009.


It was in syndication on BET before it got canceled, and has grown more popular since it left the CW.   BET has decided it wants to develop more original programming and The Game dovetailed nicely with BET's plans.  After doing some negotiations, they got the green light to do a fourth season of all new episodes. 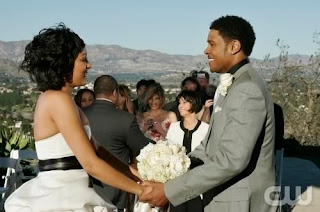 Tia Mowry and Pooch Hall will be back along with Wendy Raquel Robinson and much of the original writing team.   Coby Bell and Brittany Daniel will be in recurring roles.

The storyline is also going to pick up where it left off with Derwin and Melanie now being married.   But it's going to be interesting to see what drama transpires for the newlyweds, if Tasha and Kelly's friendship can be repaired or if Kelly and Jason will get back together.
.
The all new episodes will air on BET starting January 11, 2011 and I can't wait to get back into The Game.