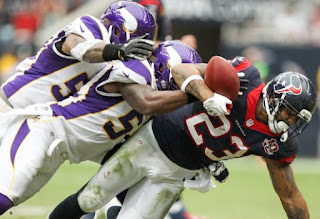 Last week of the 2012 NFL regular season and all of the games are being played on Sunday.

Many of them have playoff ramifications.  Some teams are playing for NFL playoff seedings or just to make the playoffs.  Others have players and coaches trying to impress since it will be the last games in their current NFL locales.

All Kansas City and Jacksonville are playing for the number one and number two picks in the 2013 NFL draft and which team gets which pick.

Speaking of playing for NFL seedings, my hometown NFL ballers stunk up Reliant Stadium last week and now find themselves in a must win game against the Colts at Lucas Oil Stadium to clinch the number one seed throughout the AFC playoffs and that precious week off.   If they lose to the Colts, they could potentially slide all the way to the number three seed.  I'd rather be playing Denver or New England at Reliant, not there in January.

Me and Mr. Watts are still tied after 16 weeks of picking games.  I thought the 49ers would play a more competitive game than they actually did but correctly picked the Saints taking out the Cowboys even if they did need overtime and a holy roller style fumble recovery to do so .  Mike changed his pick in time for the Jets-Chargers game otherwise I'd have a one game lead on him going into today.

This it is.  Drama once again in the final week of our 2012 NFL prognostication contest just like last year..  Which one of us will be the winner?  Or will we tie for it once again?

Mike's Week 17 picks are here, mine are in underlined bold print.  .