POTUS Is TIME Magazine's Person Of The Year 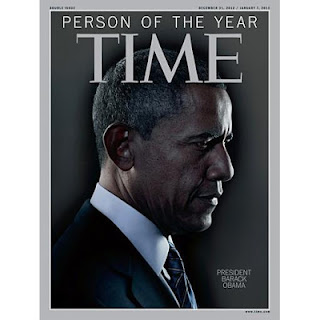 And yep, he earned it.

Since 1927, TIME magazine has chosen the person who for better or worse, has made an overpowering impact on the nation and the world for the year.

Runner up for the internationally renowned honor was Pakistani teen blogger Malala Yousafzai.   She lives in the Taliban infested Swat region of the country and is an advocate of girls attending school.   The ideas that this 15 year old girl voiced on a blog so threatened 'the menz' in the Taliban they tried to kill her.

She's recovering from her wounds in a British hospital and sentiment is building around the world for her to receive the Nobel Peace Prize in 2013.

The POTUS had the bigger impact on the year news wise.  In addition to winning reeelection in a blowout and becoming the first Democratic president since FDR to win in consecutive elections with more than 50% of the vote (read that and weep conservafools), he was the first president of either party since 1940 to win re-election with an unemployment rate above 7.5 percent.

“We are in the midst of historic cultural and demographic changes, and Obama is both the symbol and in some ways the architect of this new America."

“For finding and forging a new majority, for turning weakness into opportunity and for seeking, amid great adversity, to create a more perfect union, Barack Obama is Time’s 2012 Person of the Year.”
President Obama is the fourth African descended person after Ethiopian emperor Haile Selassie in 1937, the Rev. Dr. Martin Luther King in 1963 and Egyptian President Anwar Sadat in 1977 to be honored with TIME Person of the Year..   The POTUS also won it after his historic election in 2008.