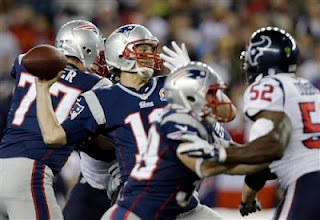 Well, was not a good Week 14 for me or my Texans.   They took a 42-14 buttkicking at the hands of the New England Patriots.  After holding as much as a seven game lead for most of the season I'm now trailing Mike by two games with three weeks to go no thanks to the Buffalo Bills expensively sorry defense blowing their lead against the St. Louis Rams.

But as Mr Watts painfully remembers,  I erased a four game deficit last season in less time.  I have three weeks left starting with this one.

I know what happened the last time the Texans embarrassingly lost a nationally televised game.  They took out their frustrations at Reliant on the Angry Birds.   This time it's Andrew Luck coming back home as the quarterback of the Indianapolis Colts and the Texans needing a win to clinch their second straight AFC South division title and needing to just win baby to stay ahead of the Patriots for the number one AFC playoff seed.

Let's just say the Colts picked a bad week to be coming to Reliant for this crucial game.

Well, gotta handle my Week 15 business and stop the bleeding  Tired of the mediocrity that's allowed him to inch ahead and erase my lead in the first place.   Mike's picks are here, mine are in underlined bold print.

Sunday, December 16
Packers at Bears
Giants at Falcons
Buccaneers at Saints
Vikings at Rams
Redskins at Browns
Jaguars at Dolphins
Broncos at Ravens
Colts at Texans