My fave NFL ballers put on their deep steel blue uniforms, shook off the beatdown they received at the hands of the New England Patriots last Monday and welcomed Andrew Luck back home by pinning him and his Indianapolis Colts with a loss at Reliant.


The 29-17 win clinched the AFC South title for the second straight year for the Texans.  They rolled up 417 yards of offense in this game, with Arian Foster leading the way with 165 yards rushing on 27 carries and Andre Johnson catching 11 passes for 151 yards and a touchdown.

The Bulls on Parade also showed signs of getting back to normal with JJ Watt getting closer to Houstonian Michael Strahan's single season NFL sack record of 22.5.   JJ is having an NFL defensive MVP type season and is at 19.5 sacks after taking Luck to the Reliant Stadium turf three times.

The Texans also received an early Christmas present a few hours later when the San Francisco 49ers beat the Patriots 41-34 in Foxborough. 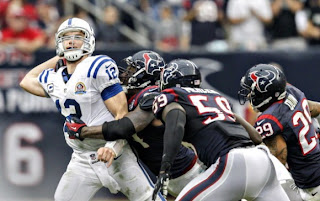 All the 12-2 Texans have to do is win one of their two remaining regular season games against either the Minnesota Vikings or the regular season finale versus the Colts at Lucas Oil Stadium and they will clinch the number one seed and home field advantage throughout the AFC playoffs.

Congrats on winning the AFC South title for the second season in a row.  But the eyes of every Texans player and fan are turned east toward New Orleans.   They took a major step toward making that happen today.
Posted by Monica Roberts at 11:30 PM