I-69 Signs Finally Going Up In Houston Area

When I lived in the Louisville area, during one of my trips to the Indianapolis metro area I actually got to do a portion of it on I-69, the eventual NAFTA superhighway which was approved in 2002. 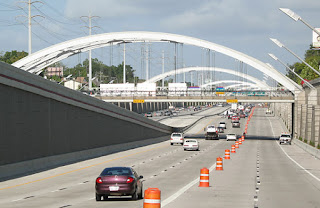 I -69 is being extended across several states from Indiana to terminate at the Mexican border here in Texas.  When I moved back home in 2010 I got to travel on a co-signed portion of it on I-55 from the Mississippi-Tennessee state line south to the I-69 interchange near Hernando, MS that heads off in the direction of Tunica and its casinos.

When US 59 was widened and rebuilt over a decade ago in the Houston area, it was done to interstate highway standards.  That came in handy when the 1-69 NAFTA superhighway corridor in Texas was routed along much of US 59 which transits east Texas and becomes a major freeway just northeast of Houston. 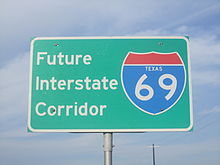 TThose of us in the Houston area will start seeing gradually over the next few months I-69 signs installed on the section of US 59 running through our area with the first section being a 35 mile (58 km) one from FM 787 near Cleveland, TX  past IAH to the North Loop 610.

The 40 mile (63 km) section of 59 (AKA the Eastex and Southwest Freeways) that runs in a north-south direction from Loop 610 past the east side of downtown, Minute Maid Park, the George R. Brown Convention Center and the southern half of the Montrose gayborhood to Rosenberg, TX in Fort Bend County is awaiting approval to be signed..